Centre to set up e-waste recycling unit in Bengaluru

The Centre has announced a state-of-the-art e-waste recycling unit for Bengaluru, India’s technology capital which produces an estimated one lakh tonne of electronic waste a year. The Chemicals and Fertilizers Ministry, which is setting up the facility, said this is also India’s first such unit in the government sector.

The Central Institute of Plastics Engineering and Technology (CIPET), a research institute that comes under the ministry, will set up the unit in the next four months. The initiative will later be replicated at other places, Union Minister for Chemicals & Fertilizers Ananth Kumar announced. He represents Bengaluru South in the Lok Sabha.

Bengaluru, which accounts for about a third of India’s software exports and is home to about 7,000 startups, occupies third place in the country in producing e-waste. The CIPET says it has developed technologies for recycling e-waste plastics into value-added products for various applications including electrical and electronic components and structural composites.

The project, a statement from the minister said, would promote entrepreneurship opportunities for strategic utilisation of high performance plastics and metal waste. “The setup would broadly design eco-friendly techniques of managing and processing the e-waste in an organised manner.”

India generates about 18 lakh tonne ewaste a year, which is growing at 30% annually. Of this, about 5% is bought by the 153 approved recyclers and dismantlers and the rest is picked up by the unorganised sector which extracts whatever value it can and dumps large parts of it into landfills. 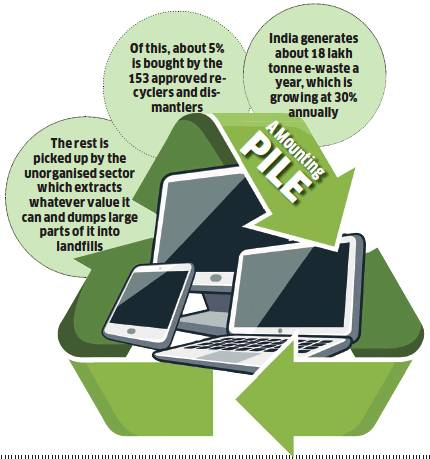 “According to a recent report, every day, we are to get rid of over 416,000 mobile devices and 142,000 computers either by recycling or disposing of them in landfills and incinerators,” Ananth Kumar said.

About 180 e-waste recyclers from across the country recently came together to form the All India e-Waste Recyclers’ Association, based in Bengaluru. The association has been formed to streamline the e-waste recycling sector in the country.

Sandhya Narayan from the Solid Waste Management Round Table (SWMRT) felt that the CIPET’s recycling project should fill in the gap in the existing informal sector. “It should not break down the chain but should do high-end work and strengthen the existing system,” she said.

The main challenge in the e-waste sector is transporting the waste from user to the recycler. Recyclers expect the waste to be transported to their doorsteps but consumers do not directly transport but hand it to waste-pickers.

“Unorganised sectors dismantle e-waste in unscientific ways which is detrimental to the environment.

E-waste has to pass through a proper recycler who meets the environment standards,” said SR Pejavar, cofounder of Eco eMarket, a Bengaluru startup that offers an online platform to trade in electronic and other waste.